I’ve been planning on doing this run for ages and finally got a chance, the OK from the Boss and could also use it as a training session for the Marathon Trail Lago di Como. Plotted the route on Strava, made plans on nutrition and hydration, packed some mandatory safety gear (over here it’s minimal) hoping to have some cold beer en route, as well.

The narrow via Rusconi was dead, but well lit as I stepped out of the building on this balmy morning. I was glad I listened to Otto about leaving early – it seemed it’s going to be a hot day.

It got warm very quickly as I was going up to Brunate. Haven’t seen anyone until I got there. [Note to self: don’t take rubbish as reference point – it sometimes gets taken away]
It was so silent in Brunate – only one man walking his dog. The square before the church was empty – usually full of tourists. Took the turn towards S Maurizio along the narrow road. Few cars passed me, one of them had two hunters grinning at me (their clothing was a dead giveaway).
I took a wrong turn in S Maurizio. Went down a narrow track, two German Shepherds made a big noise as I passed, then nearly ran into a fence. Turned left and kept running when I noticed a young deer – beautiful sight!! Then I realised the track ends, climbed back, past the loud dogs to check out the right way… which of course was in plain sight if I would’ve taken a few more steps to see the sign.

The wide cobbled track took me through a very tall pine forest, then I passed Baita Carla (it was closed), then up to Pizzo Tre Termini and Monte Astele. Kept looking at my watch and checking if I was on track. I was also getting quite warm and wished something was open along the way before the bigger climbs. When I saw Baita Boletto Fabrizio, I thought I’d give it a go. Lady was setting up for breakfast (the Baita is also a place where one can sleep), I asked her if I could have a small cold beer. She looked at me strangely first, then said yes, of course and opened a small can of misty Perroni. I paid (pulled out a 50 euro note, she wasn’t happy about it, but in the end it was ok), had the beer, used the (very clean) toilet and got back onto the track.

It was a beautiful morning, took lots of shots, and saw a few people (even trail runners!! Serious ones, of course) as I was going up Monte Bolettone. Had a chat with two guys (they were doing a smaller circuit) – they were a bit shocked about the course I chose (Como to Bellagio) and about me coming from Australia. They were really nice, though.

On this trip I asked myself quite a few times why on earth I chose to take the highway (dorsale per cresta), when there are perfectly good trails along the contour lines. For the challenge, of course.

At some point I could hear some bells. Like cow bells. Then I saw two dogs running around, they were hunting dogs. I recognised the two grinning guys from the car in S Maurizio in the morning. They recognised me, too “la signora we saw from the macchina”. I have seen a few more hunters during this trip, but haven’t seen any guns with them. To be completely honest, I worried (more than once) about a wild boar popping out from nowhere… could see their marks everywhere in the forest. 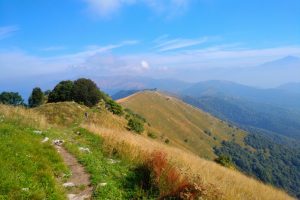 There were lots of people (compared to no one earlier) on the following section. On the way up to Monte Palanzone I met Lumo (if I can recall his name correctly). He is a gentleman in his mid to late sixties. He didn’t speak English, but we understood each other. We both agreed that a cold beer would be nice. He did a very kind gesture, he gently stroke my face as a way of saying “you crazy beautiful thing”. Wished each other a buona giornata and went the opposite ways.

At around Monte Bul I realised those fontanas must be dry or far far away… only took 1 l of sugary water with me, no fruit and it was getting pretty hot. I planned to take a detour to Comei, to the restaurant if I found nothing else before that. Spoke/messaged with Otto a few times. Didn’t tell him I was running low on water – he would’ve panicked.
As I was approaching the road, could run on asphalt downhill (not fun, but the thought of a cold beer was very appealing) and could see the restaurant from above on my right. Cars, motorbikes, road bikes, walkers… busy place. My feet were still recovering from dancing the night away at the wedding two days ago. It’s all about conditioning, right?!

Walked into the pub, the 12 pairs of eyes sitting around the table, having a drink and a great (loud) discussion, turned towards the strange woman with a pack, asking for a birra (grande!!) and a bottle of water. The young guy at the counter didn’t speak English, but was very nice. He offered to fill my flasks with cold water, too. Toilets in these places are really clean, so worth paying for that beer (or whatever liquid one drinks).
I knew there is another climb after this, so I also had one of the sandwiches I packed. It was really hot by that time. Told Otto it’s all good and got back onto the trail. It’s amazing what a cold beer can do!!
The climb went through the forest for a while, I had the bottle of cold water first, then I was back in the open and the climb was getting steeper. I could see Mount San Primo towering afar, behind Mount Lot.

By the time I got up to Mount Lot, I wished I could have another beer (or two).

Mount San Primo (on the crest) is a true beast. Had to stop pretty much after every 10 steps to take a breather. At some point it got so steep that I felt I’ll just roll back down. The long grass covered the ground and didn’t provide much footing or stability, either. I could see people hiking along the Cima del Costone and some up at San Primo.
When I finally made it to the top, I was surprised by the number of hikers up there. They were eating, talking, laughing, taking pictures… in fact I’ve come to learn that this is what people do here. They get up on a mountain, change into dry shirts, pull out the food, drinks (yes, drinks), eat, talk, spend some time there before heading down. They don’t rush. They enjoy the view and simply being up there.

Well I didn’t have this luxury. Had to get to Bellagio by about 4 pm, because Otto was waiting for me with dry clothes and a possibility to eat and have a beer. We were also locked by the ferry or bus timetable. Otherwise we would’ve been stuck in Bellagio for the night or get back to Como by taxi.

The other side of San Primo was equally steep and also slippery with rocks and tree roots. Many people hiking it from the other side (there was a car park nearby), all huffing and puffing, just like me not that long ago. I nearly landed on my bum once, did a FOOSH (Falling On Out Stretched Hand) instead. Then ran along people’s back yards, saw a fountain, cold, fresh water. I refilled my flasks and washed my face. Otto called and asked how far I was. Told him about 1:30 – 2 hours away… he didn’t seem too happy about it.

Rifuggio Martina was buzzing with happy people as I passed it. If I wouldn’t have promised Otto to get there in about 2 hours, I would’ve stopped for a beer – it was so inviting and I was running low on energy. I was supposed to get onto another crest via a track from a corner, but it was fenced away with electric cables (for grazing buffalos)… scratched my head as I did the up and down trip to double check, then continued on the road, hoping I’ll just figure it out. I started to see the red and white signs that could take me to Bellagio. Here, they don’t display kms, but the time needed to get there. Sometimes I could see the same amount of time on signs that were about 20 minutes apart… so very “reliable”.

I stopped at a corner, where there were two signs pointed to Bellagio: one said 40 min and the other said 1 hr 10 (the latter also said Bellagio Imbarcadero). I surely chose the first option, thinking I’ll get there in about half an hour. A lady told me that it’s not a good track because it’s all slippery rocks (she clearly didn’t like the idea), but I went down that path anyway. It was stunning!! True, it was slippery, but beautiful. Here I did end up on my bum. Spoke to Otto, who started to come to meet me. Asked him to go back, as I don’t know where I’d get into Bellagio.

That path took me to a village where the signs suddenly stopped and the boys on a tractor hastily pointed into a direction… Followed that, which was strange, because it was going uphill and I was supposed to go downhill. Saw a farmer, he said I could go either way, it’s about the same – 3 kms. I ended up on the road that must have been the 1 hr 10 version. I could run from there and soon I was in San Giovanni (the St Antonio fountain was a blessing with its cold, fresh water), then in front of Giardini di Villa Melzi. Otto asked me to wait for him there, then changed in the toilet (6.50 euro for the entry into the gardens – so beautiful!!) then walked around in the park while Otto took pictures of a hungry and very thirsty me.

We walked around in Bellagio a little, then sat down and had a beer and two tiny pizzettas (not sure if he was trying to piss me off, I could’ve eaten a horse). Haven’t seen much on the ferry, on the way to Como, kept falling asleep. The horn of the ferry went off at every wedding along the coast (at least 8) and people were cheering.
Quick shower so we can catch up with the newlyweds for dinner.

I have scored a CR on this course, but only because out of the 6 people I was the only crazy woman to take the dorsale per cresta to Mt San Primo.