Those who know me, also know by now that the Prom is my favourite place to run – it’s my

happy place. It’s special. And when (and if) I share it with someone, that person is pretty special in my soul, too.

So when Bich messaged me with the proposition of doing the loop, I was in. I knew I had to negotiate the day with Otto (he doesn’t want me to go away on the weekends), but so missed the place that he was finally OK with it.

Looked up the weather and the tides and figured if we can get going by approx. 7.45, we have a chance of missing the high tide. Last time I’ve been to the Prom, it opened at 7.00, so I thought we’ll be OK. Otto told me to double check, but I must have been preoccupied with something – I forgot.

We left my place at around 5.40, normally 2.15 hrs to Tidal River. I drove Bich’s car and probably all the way under the limit, because we got to the park entrance at about 7.40. The ranger said they open at 8.00 because of the daylight and close at 6.00. He told us to park a bit further until then.

To cut the story short(er), we started our run at 8.40 – one hour later than planned, which meant nearly high tide. We’ve warmed up on the flat and hiked the road part, chatting and being passed by a few cars. By the time we got to Telegraph car park, there were about 10 cars there. The track was taped diagonally to stop people getting onto them. There was a notice close by saying that no hiking on the tracks and everyone should leave the park by 6 pm. We quickly agreed that this doesn’t apply to us, because we’ll be back way before that time, so we went around it and started running.

We’ve agreed at the beginning, that we’ll just take it easy – Bich hasn’t done any long runs since Archie and I still needed to recover (according to my Garmin) from my previous runs – and enjoy the day.

We’ve noticed that there is at least one person in front of us. The fresh threads were Saucony, so the person must be a trail runner. I won’t mention it as many times as we actually spoke about it, but it came up several times during the day.

On the way there I imagined sliding and sloshing in mud as it usually happens after prolonged rain at the Prom but Sealers Tk wasn’t as wet and muddy as I expected. There were trees down we had to get around, over or under along the day (won’t mention all of them, either) which slowed us down and amounted to some of the 1.10 hrs of non-moving time.

The board walk was like and ice skating surface where the chicken wire was missing. I was running in front and tippy toeing or slowing down completely at those spots. There was this tree, fallen across the walk, not too big, maybe 20 cm in diameter. As I stepped over it, I was grateful I didn’t jump, I would’ve landed straight on my bum, because it was so slippery. Bich slowed down as well, but must have taken a wrong step, because she slipped and scratched her arm. The hand sanitizer must have stung, but she soldiered on. When we’ve checked if nothing else is damaged, I’ve noticed her impressive tatt, which became the subject of our conversation for a few kms.

We’ve stopped on the bridge to admire the spooky creek with its dark water and black-grey branches entwined almost like protecting it. Always reminds me of Julie – she loves it.

When we walked out to Sealers, we have noticed a few more footprints and that the tide is high… took our shoes off and walked along the narrow beach, which was full of beautiful shells. And a dead starfish.

The spot we figured would be OK to get through the creek suggested the water would reach somewhere around our belly button – which proved to be true. I went first. The water was really cold and quite rapid and getting across the rocks was the more challenging part. I’ve been in this situation before, it was nothing new, but after I got out, I felt very cold. Bich made it through without any problems, as well and then we’ve agreed that the relatively dry socks and shoes was a really nice thing to put on.

We’ve hiked the ups and run the rest and the conversation was really good. Long runs and long drives are the best ways to get to know someone.

At Refuge Cove North (one of my favourite beaches with its golden sand) I’ve noticed the waves hitting and going around the big rock closer to the beach exit. There is a creek behind it with very dark (nearly black) water that looked really deep. As we stood there, trying to figure out how we’ll get through it, a wave came and nearly washed Bich away. I was standing on the top of the rock, she was preparing to run across when the water was retracted, when the wave came. We got her up on the rock, then when the moment was right, she shot across, then waited for me. I must have been like those old ladies turning left… letting a few cars pass… in this case the waves. Then I ran across as well. I think Bich has filmed it and it will be fun to watch later on.

Refuge Cove was at total high tide when we arrived, I’ve  never seen it like this before. We’ve fetched some water at the tap, which took forever, because I forgot to soak the filter of the BeFree bottle. Our pants were still wet… then we headed up towards Kersops Peak. Stopped for a few minutes on The Rock and sat down, hoping the calming moment I’ve experienced the first time I’ve done that will happen, but it was way too cold to sit there and the water wasn’t as beautiful as it was every other time I had the privilege to see it, so after a few minutes we got going.

We so got sunk into talking, that I haven’t even noticed how we got up to the junction. I usually stop there, look around and enjoy the vista, but this time the wind and the drizzle cut it short. We agreed that another time we’ll go up to the peak – Bich hasn’t been there before – then we headed down.

All the beaches we’ve went along on this side of the peninsula had some kind of obstacle in store for us which also made this trip more “interesting”.  When we got to Waterloo Bay, the wind and drizzle got a little bit wilder. Told Bich, as long as we keep moving, we’ll be OK. This is where I usually start to feel fatigued and then again on Oberon Bay Tk, so picking up the pace even slightly was an extra effort. I kept checking on Bich, as this must have been even harder for her. She is a tough cookie. We’ve run the flats and downs and hiked the ups.

About 1.5 km in we’ve bumped into the owners of the two extra footprints we’ve noticed on the beaches; they’ve told us there is another guy in front of us, running. We’ve exchanges some pleasantries, then wished them a nice day and kept running. We thought the runner will take Telegraph Tk, because we haven’t seen him between Tidal River and Telegraph car park. We were wrong, he went via Oberon Bay, just like we did.

At the junction there were a few hills of gravel, ready to be spread along the main tracks. We went around them (they pretty much blocked the track), then turned onto Oberon Bay Tk. More of them there… I was really hoping there will be not that many, as it really broke our rhythm. The 4WD track didn’t seem as hard to run as other times. I guess that was thanks to the lack of heat and perhaps because the sand was a bit more compact after the rain. We were able to shuffle all the way to Oberon Bay without many slow downs. Based on my calculations, we could finish in about 1.45 hrs.

Oberon Bay was flat and the sand just perfect for running, so we made the most of it and ran along, taking a few shots and talking very little. At the end of the beach we sloshed across the creek (it didn’t matter anymore), then headed up on the track. The waves were very angry at Lt Oberon Bay and the hike out still hard, but not that bad as other times.

We finished strong, had a hug, a beer, a shower, some food, some more beer, then promised the rangers that we’ll be out in no time and way before they need to close. 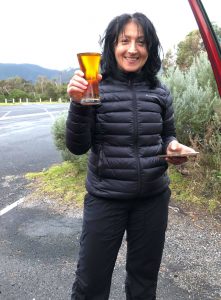 Loved the drive back, too. I must have bored Bich to death with Lago di Como Ultra 😃 but we needed to stay alert for the drive. Otto was waiting for us with the garage door open. We had some of the beautiful sourdough bread Bich brought (straight out the oven) in the morning and a beer, while telling some stories to Otto (who was still baking his cakes for next day).

It was a great day. In spite of (or thanks to) the weather we had a great (I know this is not correct linguistically, but it is what it is) time, got to know each other better and looking forward to the adventures the future brings.

A few more shots from the day