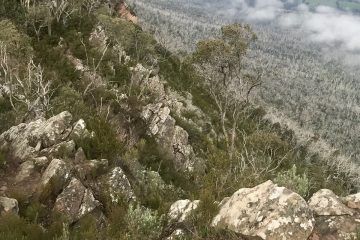 Decided to check out the Cathedral Ranges Challenge half marathon course, it looked awesome on the video. After a few facebook posts, I realised can’t go there alone, it’s quite dangerous—need to find a buddy. Julie is a great sport and I know she would have my back, just as I would have hers. We agreed on meeting on Monday at 7.00 A.M. in Healesville at the Innocent Bystander and go with one car from there.

It was freezing when we left Healesville. Julie was driving (she’s been there before). I really admire this woman—she’s so collected and calm… and let’s not forget fast!! I want to be like her when I grow up!

We got to the Cooks Mill Campground around 8.00, just as we planned. Went to the toilet, said hello to the German campers, who were just waking up, geared up, then headed off on Tweed Spur, a flattish 4WD track. I was already puffing, usually need a km or two to warm up. After about 1.6 kms we turned right, onto Messmate Tk, which was a lovely single track climb, all the way to Cerberus Rd, at the Sugarloaf Saddle Day Visitor Area. Julie got there earlier,  she was looking at the information board when I finally arrived. We chatted a bit, had some food, then headed up Canyon Tk towards Sugarloaf Peak.

This section was fundangerous with some rock wall climbing in the mix. This is the part I was worried about, but managed without major issues. Running/scrambling along the Razorback Tk was both fun, hard and dangerous. I’ve slipped and bruised my left leg first, then again slipped and cut my right leg on the edge of a rock, landing in a scratchy bush. From here on it really hurt. All those pins of that particular type of bush (there was many of them along the track) have been scratching the already bleeding wound and the bruise. That part was a bit of a torture. Julie suggested I should stick a dressing onto the bleeding one. I only had Bandaid… Julie was prepared and had one of those “good” ones. Felt much better after that.

That ridge is something I always wanted to try and now I did. There were places which were only scrambling over rocks, then there were the somewhat runnable—but tricky—parts, where your ankle could just go kuku. There were also bits that were pure single trail (although not much) along the ridge. Anywhere we looked, the views were breathtaking. Every now and then we could hear the cars driving by on the main road. They were many kms away, but we could hear them.

The plaque in the memory of the 15 year old boy who died in 1983 on a school excursion is an eyeopener. It reminds me never to take life for granted.

After South Jawbone Peak we continued on Farmyard Tk towards North. We weren’t in a rush, just enjoying the scenery. I tried to keep up with Julie, it wasn’t easy. Around Cathedral Peak we saw the remnants of a goat. It was a shock at first, but then Julie said that it could’ve been a bull fight and the birds must have finished him off. Only a few hundred meters further there was another one.

At Cathedral Peak we stopped to take some (more) pictures with the trig and the surrounds, then decided not to go up to Little Cathedral Peak, but head down Little Cathedral Tk, then Neds Gully Tk. This trail was going downhill quite steep, bit (dry) slippery in places. Julie was really fast, I only caught up with her when we were nearly down at the camp site. I saw an old man on the track hiking up.

I wore the Salomon Sense Pro 2s, size 6 and they really started to hurt my toes. Every step and trip became painful. When I got to an intersection, I pulled out the map. There was a track going straight, then crossing the creek, another one turning right. I wasn’t sure which one Julie went on, but when I couldn’t see anything around the creek I decided to head on the other one, catching up with her and then we were running (I was jogging) along Little River Tk, a 4WD track. We realised there must have been a single track running along this once we got back to the camp site.

We changed and headed back to Healesville. All up it was a great adventure. It took us 5 hours, with 3 hours moving time to complete it. I can’t imagine a race on this course though.

Food: the usual quarter sandwiches, although I didn’t have any of them (forgot the tomatoes), we shared them after the run. Had a mandarine, two VFuel gels, dark chocolate, crystalised ginger and two dates.

Gear: didn’t take the long johns, but I was wearing the thermal top underneath the jacket. It was quite windy. Had the gloves, too but didn’t always wear them.

How to get there

This is the route we took from Healesville. Click the More options link on the map to enlarge it. From Little River Track it’s dirtroad and kangaroos.

Feel free to study this activity.

There are drop toilets and water at the campground behind the tanks.

Hope all this info has helped.