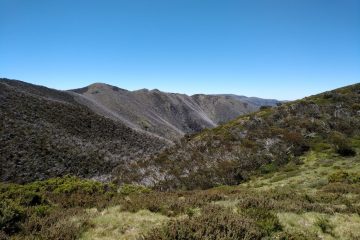 The plan was this: I sleep a few hours during the day, go to sleep early, wake up at midnight and start driving at 1 am to arrive to Harrietville at around 5.30 and start at about 6. I also planned to not go alone, it would’ve been much safer out there and especially the drive home; but things don’t always go to plan… some assholes have hacked the sites I look after and I needed to fix that first – no sleep during the day. By the time I ended up going to bed, it was after 9.30. I only saw mean hackers in my dream, woke up at 11.39. Worked a bit, spoke to Suzie and Evgeni (they were in Milan, wondering what the hell I am doing up at that hour) and finally rolled away at 1.43 am.

Getting out of town wasn’t smooth sailing with the road works on the Monash and Tulla and even further out, but once I was over that, I just had to concentrate on kangaroos. Stopped for fuel and to stretch out at the stations and was glad I packed some coffee in one of the 250 ml soft flasks – I could sip on that for a bit of “pick me up”. The moon was mesmerising, it was hard not to keep looking at it – so shiny and big! From the freeway at Glenrowan to Myrtleford, then after Bright I really had to focus. Nearly hit a rabbit and saw two roos on the side of the road.

By the time I got to Harrietville it was daylight. I pulled into the small parking at the caravan park end, toilet, had something to eat, geared up and got going. It was 6.25. The air was crisp, had my gloves on until Otto called. Took a photo of the house we’ll be staying in March on Feathertop Lane – Ani and Nelu can even come out with their coffees in their hands and cheer us all, I thought. As I was shuffling along, listening to Otto, a car passed me. The driver was eating an apple; we waved each other, then he kept driving. When I got to the trail head the same person was putting his hiking shoes on. We said hello and wished each other a nice day. I signed the book and hit the trail.

Shortly, had to stop to take my Bonatti off, it got too warm. Stuffed it into the back pack, extended the poles and kept going. I knew it’s going to be a long day, I haven’t done any training since L2H, but I was just happy to be out there – finally! I didn’t want to rush Bungalow Spur, needed energy for Westons and Swindlers, as well. One step in front of the other… ran the flats as much as I could, the overgrown bushes made it a bit harder, though. I saw a deer on the left hand side before Picture Point, by the time I got my phone out it hid in the bushes. Lots of birds, I even saw a lyrebird. Gabor loves them.

Bungalow Spur seemed to go forever. Last time I’ve been here it was in December, with Tay. We were chatting away back then, now I listened to the sound of the forest. Switchbacks, a bit of mud, rocks, leaves, roots… then I passed Tobias Gap. Kept looking back to see the mountains, the view was just amazing. Passed the old Feathertop Hut site, then the creek turnoff… then finally got to Federation Hut. Took a few photos, then looked at Mt Feathertop and the Razorback – yep, I’ll need to go along both today. The wind picked up earlier and it was getting cold, pulled out the Bonatti and put it on, then headed towards The Cross.

On my way up I was thinking, that I maybe should go and check out the creek at the MUMMC Hut, it’s “only” 500 m from the Feathertop track, but then I looked at the watch and dismissed the idea. Another time. The views were amazing as I was going up towards the summit. Couldn’t resist – had to take photos (this is where the bad hair shot happened). Passed the turnoff to the MUMMC Hut then saw the Stairway to Heaven (I just called it that), the track goes up like a beautiful staircase. At the summit I took a 360 degree video, checking out the line of Diamantina Spur.

I was getting emails in the meantime… one of the sites (I didn’t get the chance to fix it, yet) was restored, but I had a bad feeling about it. Checked it on my phone (so glad there is good reception up there) and it was badly hacked, I really needed to do something about it. As I was fiddling with the phone, pulling it out from and putting it back into my pocket I tripped and fell onto my left knee. Gosh, that hurt! Those sharp rocks are so unforgiving! I walked a bit, checking the damage, swearing away, then picked up the tempo until Otto called, then Paul.

Passed the Cross and wanted to enjoy the Razorback to Diamantina Spur. Didn’t really work out – more emails… I was tossing the idea of cutting it short – I must fix that site! Ran to the Diamantina Spur turnoff, turned around and headed back. I was both glad and disappointed.

As I was getting closer to Federation Hut, I could see someone laying out his clothes onto the veranda. I recognised the guy from the car, then thought I’ll need to find a place to put my pack down until I pack away the Bonatti. When I got there, I said hello and asked him where he is heading. He said he wants to go up Mt Feathertop, then along the Razorback and down Bon Accord Spur.

That’s feasible in a day, right?! I told him that’s 40 km and of course he can do it if he keeps moving. Asked him what happened to his clothes. He said he miscalculated the heat coming up and now he’s cold. He doesn’t have anything else warm with him and up there is quite chilly – next time he’ll have to bring a thermal, like mine (the Bonatti).

When I heard the word thermal, I thought I could give him my thermal top I was carrying for emergencies. Pulled it out from the pack, took it out from the plastic bag and gave it to him. Might be a bit tight, but is a thermal, nevertheless. He was very grateful for that. Asked him if this is his first time here, he said yes. Told him to watch for the fork before turning onto Bon Accord. He’ll need to keep right, otherwise he’ll miss the turn. He thanked me for that. I started going, but then I remembered I could show him on the map I was carrying. We said good bye, wished each other all the best and I got going.

As I was running-hopping along, I thought I should’ve given him the map, and maybe some food, too. I also should’ve told him where to get water, as there is nothing until Washington Creek… then I thought how could you leave without a map?!

I tripped quite a few times on the way down and frankly hated those moving rocks. Heard a larger animal in one of the corners, but I couldn’t see it. I was really focusing on not stepping onto a snake. It looked like “snake-world” there. Thankfully I didn’t see any. By the time I got back to Harrietville it was quite warm, 31 C. I quickly changed, washed up and set up my laptop on one of the picnic tables. It was quite a nice way to work. Had some food, a 750 ml bottle of ginger beer while people were coming and going around me.

By the time I finished what I needed to do, it was after 2 and time to head home. Soaked the towel and put it on the knee and the triangle bandage around my neck and drove home. No aircon for me.

At a glance – It was supposed to be

Resources – It was supposed to be